South Africa, the southernmost country in Africa, has a rich culture which exists as a result of its historical background. The country, being the 24th most populous country in the world, has a large population of creative individuals. This creativityis often displayed in the colorful festivals thatare held annually. South Africa has at least one festival happening in every month of the year. The festivals in South Africa are particular to certain regions of the country for some reasonswhich include the culture of the region, and an event which takes place at the region among others. Most of them are for the display of performance arts and culture, while others are for the celebration of the anniversary of an historic event which happened years ago. Tourists troop to South Africa to visit its historical sites and enjoy the numerous festivals. South Africa also give room to foreign acts to display their creativityduringthese festivals. Every South African festival is colorful and unique inits own way. They will leave you wanting to come back the following year. These three festivals listed below are known to increase the number of visitors in South Africa every year. They are not just popular in South Africa, but in the world. These three festivals are:

Like the name implies, the national arts festival displays performing arts bylocal and international artists. Theatre arts, dance, stand-up comedy and live music are performed by various individuals from across the country and the world. Visual art exhibitions, films, talks and workshop also make up the framework of this festival. There is a large food and crafts fair during the festival and tourists are given historical tours round the city. The festival is divided into two sections: the fringe and the main program. They are both on equal footing but have slight differences. Unlike the participants of the main program, the fringe participants are exempted from the selection process and are responsible for footing the billsof their performances. The processinvolved in selection of artists for the main event is based on creativity oftheperformer and the cost of the performance. Many artists struggle to get a spotat the main program. This assures you of five star performances all through the festival. The National Arts Festival gives room for more than 200 performances, and records an attendance of about 200,000 visitors every year.

Other festivals occur alongside the national arts festival as subsidiary festivals. These festivals are the Thinkfest, Spiritfest, Wordfest, National Youth Jazz Festival, Tingo festival, Creative Digital Art Festival and National Schools Festival. Wordfest is a festival organized by Rhodes University in Grahamstown. It is the only multilingual festival of languages and literature in the country. It takes place at the Institute for the Study of English at Rhodes University. It is directed towards building a reading culture among the citizens, and developing good reading and writing skills. Activities include workshops, lectures, development projects for junior and high schools and many more.Booksare available for purchase at the book stands set up at the venue of the Wordfest. The National Youth Jazz Festival holds at the Diocesean School for Girls. It is directed towards encouraging young artists and giving them platforms to grow. The Young Artist awards is presented by the National Arts Festival Artistic Committee to young South African artists who have demonstrated exceptional abilities in their various fields but have not achieved national exposure.

The NationalArts Festival holds for eleven days. It’s often heldbetween the last week of June and the first week of July. It holds at approximately sixty venues in the city including outdoor locations for outdoor activities, theatres, churches and schools.Allquiet streets in Grahamstown are often the opposite during the National Arts Festival due to outdoor activities holding there. Youcan also visit places around Grahamstown like the Thomas Baines National Reserve. Your summer holidays will be nothing but fun if you spend it in Makhanda attending the national arts festival.

Cape Town Jazz Festival kicksoff with a free concert at Green market square. It presents a star-filled line up of both local and international music stars. More than 40 artistes perform on 5 stages. After the free concerts, other concerts require you to pay a token for the tickets. The genre of music mostly displayed include jazz, funk, afro pop, fusion, soul and RnB.

Up until 2003, the festival held at the Good Hope Center. The venue was changed to the Cape Town International Convention Center and has been the same ever since. Cape Town Jazz Festival holds for two nights between March and April. It happens either at the end of March or the first weekend in April. 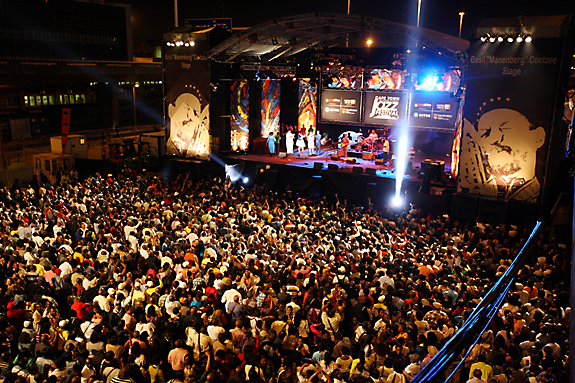 The Oppikoppi Bushveld Music Festival holds annually in the Limpopo province of South Africa near the mining town of Northam andPretoria. It started in August 1995 as a rock festival, and has held every year since then. It derives its name from the resort where the festival started. Itstill holds at this resort but has expanded to more places like Northam and Pretoria. In 2008, Oppikoppi Bushveld Music Festival was the fourth best music festival in the world.

This festival is really Bushveld, just like the name implies. People flock to the farm and camp out in the bush filled with red dust and thorn trees and enjoy music for several days. Initially, the festival focused fully on rock music. Over time, more genres of music have been added to the festival like jazz, punk, funk, world music, house music, emo, big beats, traditional music, indie, hip-hop, acoustic, soul music, comedy and many others. The amount of performing artists and attendees increase every year. The festival records more than 20,000 attendees and more than 100 artistes, both local and international. Thelocal acts are mostly South African bands. About three stages are set up for this festival every year. In 2019, about seven stages will be set up at different locations for this festival. You are free to choose which location you want to be in and which stage you want to stay closer to. The bands playing at the Oppikoppi Bushveld Music Festival in 2019 are, Catlike Thieves, Bittereinder, Baskerville, Black Cat Bones, Dance, aKING, You’re onFire, Fokofpolisiekar, Beast, Gert Vlok Nel, Toya Delazzy, Jack Parow, Shadowclub, Lilly Million, The Kiffness, Thieve, and many others.

Oppikoppi Bushveld Music Festival holds for four days in the first week of August every year. It gives you an opportunity to enjoy good African music in the summer heat with a typical African background and atmosphere. There are also spaces for camping around the stages too. If you dig adventure, summer heat and outdoor activities, this festival is specifically for you. Get your camping kit ready and book a ticket to South Africa this August.

If you now have found interest in not only visiting the great festivals of South Africa but also traveling through that beautiful country, visit the German website Backpackertrail to get further information on travel routes and local festivals.