Now, most the Diamonds are manmade that is made in the Laboratory but it looks as a natural one does. Lab grown diamond rings sparkle the way just a real one does. You can`t just state the differences at once. May only the professionals can point out differences otherwise common people could never point out.

What is a Lab Ground Diamond?

When a diamond is made in a laboratory not naturally that is called a Lab Ground Diamond. It looks just exactly the same as a natural Diamond according to visually or chemically both. Just the difference is natural Diamond grows in the earth naturally and a lab ground diamond is manmade otherwise it sparkles in the same way. Buying a manmade or laboratory Diamond won`t make you disappointed because –

The main element is present in both natural and lab made Diamond and that is Carbon. There is also a difference between the lab diamond and the lab made diamond even the only difference that is a natural Diamond is consists of a little amount of nitrogen but a manmade diamond doesn`t have so. That is why experts can only identify the natural one and the lab made one because with their technology minds they discover that which one is consists of less nitrogen and that helps them to identify easily. Unique fluorescence and laser inscriptions these are two another identifying way of lab grown diamond rings.

Not same as Moissanite

Moissanite is a diamond simulant. It looks as same as Diamond but at some points, it flashes a yellowish shade. In some lighting Situations, a greenish or a yellowish ray start reflecting.  Moissanite can be real too but unfortunately, it is very rare. The hardness of a Moissanite stone is 9.25 out of 10. It is harder than a Cubic Zirconia but still, it is softer than a Diamond because after measurement it has been proved that Diamond`s hardness is 10 out of 10. So this way they are different from each other. 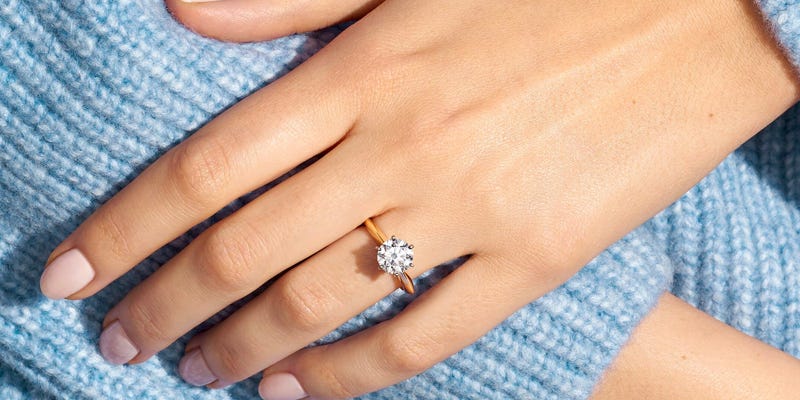 Not same as Zirconia stone too

Cubic Zirconia is the first-ever gemstone that was produced in the laboratory. The year was 1976 when it was produced and it is considered to be one of the best natural things ever. It was told that there is no such natural stone like this. It reflects a less light generally but it can produce more shades of like rather than a Diamond. It is so flawless and may both look similar to each other but not the same chemically. Zirconia stone is also a Diamond simulant. May it just clear or seems to be colorless but chemically both are very much different from each other.

There is a myth that laboratory Diamonds are usually fake. But it is not. It is as real as a natural one and it is technically proved too. Both LAB produced and natural Diamonds are containing the same properties according to chemically and visually as well. In the year 2018, it has been recognized by the Federal Trade Commission in short FTC that laboratory Diamond stones are also the real stone. Both are the same visually and chemically as well.

According to appearances, there are no such differences between Lab-made Diamond and Natural Diamond; both are high-quality stones. But still, there are few differences including rarity, cost, sustainability, and value as well.

Both natural and laboratory-produced Diamonds look exactly the same and both are high quality. Few lab diamonds are lower clarity that is consist of few inclusions that the natural diamonds don`t have. Both seem to be colorless. A variety of candy colors also can be present in both. Lab ground Diamond and the natural diamonds could appear in many shapes including oval, radiant, princess, emerald, round, marquise, pear, cushion, etc. Even for both labs made diamonds and natural diamonds sparkle and brilliance are the same.

The value of the lab made diamond Engagement stones are not yet fixed. Lab produced Diamond stones are newcomers to the jewelry industry, so it would be taking minimum time to make it fix. As it is very precious it can`t be fixed in a hurry. On the other hand, natural Diamonds had been valued fairly. After the creation of lab Diamonds and the changed wants of millennial has brought a bug change and decrease the demand for natural Diamonds. But it is also needed to be appreciated that natural Diamond today are more high quality in that case its values have remained justly compatible.

The price of a lab ground diamond ring is less expensive than earth produced diamond ring apparently. It should less expensive than a natural one and the main reason behind it is made artificially by men and a natural one that is made completely in a natural way a gift of earth. So genuinely a natural one should be high priced. But for both one thing to be mentioned and that is price varies depending on the excellence, color, shape, and most importantly sizes. So be aware of all these before making a purchase, it would make your job easy.

Sustainability of both the stones

Natural Diamonds are produced from the rock name “kimberlite” deep from the Earth and it is as clear as crystal. There are still some doubts regarding the rarity of natural Diamonds. In the World Botswana the richest Diamond mine it is. Producing a manmade Diamond is also very sustainable. It needs a few months to grow in a laboratory. Couples should always go for a GIA for the natural Diamond certification and should go for IGI or else GCAL while choosing a lab-produced one.

Utilize The Most Ultimate Advantages Of Using Cbd Edibles

5 facts worth knowing about dermal fillers

What Are the Basic Elements of a Negligent Driver Claim?

Who is affiliate marketing suitable for?

How to find the best merchant services company to work for